ELT vs. ETL - The paradigm shift

Learn why ELT is the future of data warehousing and how it improves upon ETL.

The picture above shows how data warehousing has been done for over 10 years. Data is extracted from the sources, transformed into the form needed for access by analysts, and then loaded in that form to a location where it can be accessed.

A characteristic of the ETL architecture as shown above is that all the action occurs in the center server. Both the sources on the left and the data warehouse on the right are essentially passive repositories. All the data movement, calculation, transformation, and rearranging are carried out by the platform in the center – the ETL server. When data volume increases – as it inevitably does – the ETL server needs to get more powerful, and requires more parallel processors, bigger network pipes, and more complex, expensive software.

There is a glaring flaw in this architecture.

Above is a pretty accurate picture of many existing production data warehouse operations. But there is now an obvious problem with the picture – it shows massive duplication of resources. Two powerful servers are each acting on the data, one after the other. In fact, not only are the ETL server and the data warehouse platform both powerful servers, they are both powerful servers that specialize in performing the same operations. Namely, both are good at manipulating large relational datasets – performing big joins on tables with billions of rows, for example. 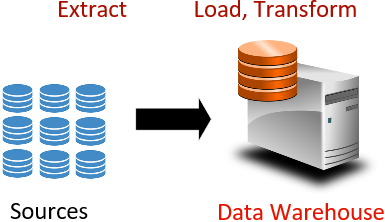 So why not eliminate the redundant server in the middle?

The advantages of this approach are clear.

The expense and complexity associated with the ETL server simply disappears. When the data warehouse needs to scale up – as, inevitably, it will – there is no need to scale the ETL server along with it, because it is no longer there. Since the cost of the entire system is now a fraction of that represented by ETL, implementing a large data warehouse is now possible even for small companies.

Why, then, is ELT not the method that drives most existing operations?

Because there is a stubborn obstacle that prevents people from transitioning. That obstacle is that software programs for designing and running data warehouses are made for the ETL world. To get to ELT, developers would have to abandon tools like Informatica and DataStage, and use whatever primitive and low level tools are available on the data warehouse platforms themselves to do the work of extracting, loading, and then transforming the data.

Our view is that this stubborn obstacle should be removed. We think that inexpensive, easy-to-use tools for designing and running data warehouses can and should be available directly on the data warehouse platforms themselves. That’s why we created ELTMaestro. The elegance and simplicity of ELT should be the norm.